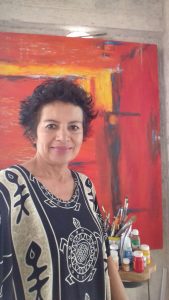 Martha Toral’s figurative abstractions transpires three mediums of expression: drawing, painting, and printmaking. Her use and implementation of color is the process of liberating itself more, with the intention to ultimately arrive at the triumph of pure color.

Martha graduated from the National School of Plastic Arts UNAM in Mexico City and received a Masters from the Academia de San Carlos with emphasis in printmaking. She has participated in numerous exhibitions in Mexico, Spain, Holland, Cadaques, Puerto Rico, Venezuela, France, United States, and Brazil. She received honorable mention in the first Biennial of Painting “Simon Bolivar” of Venezuela, and was also ArtWalk’s 2004 Featured Artist of the year.

As a docent, Toral’s works and collaborates in Children’s Plastic Arts in Mexico City and in printmaking workshops at the Academia de San Carlos.